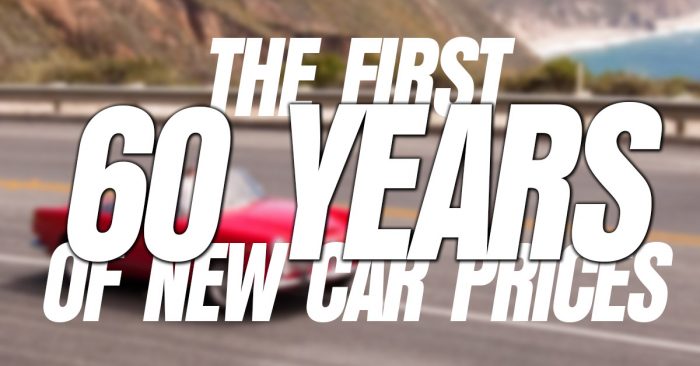 If you’ve been out shopping for a new or used car lately, you’ve likely noticed the prices have skyrocketed. This has likely been a complaint throughout the history of automobiles, but looking back, the prices sure look attractive. Here is a quick review of new car prices over the past 100 years.

Before the invention of Henry Ford’s Model T, car prices were out of the reach of most Americans. They were such a luxury item, fewer than 200,000 total cars were on the road.

The Model T revolutionized not only the automobile industry, but manufacturing. Initial Model T’s cost about $825 when they first appeared on the market, making the much more affordable to the average American family. That would amount to about $18,000 in today’s dollars.

The 1920s saw car markets in the United States and Europe explode. Ford continued to dominate through the early half of the decade with the Model T accounting for 47% of all car sales. New car prices actually fell in the 1920s, with new car’s available for less than $300. Now THAT’s a deal, translating to about $3,500 in today’s money.

The Depression impacted the markets for new cars, which, in a chicken and the egg equation, led to layoffs of autoworkers which led to fewer people who could afford a new car. Used cars became increasingly popular. New car prices averaged about $600 through the decade with gas prices at about 10 cents per gallon.

Popular cars of the 1940s included the Pontiac Streamliner, Plymouth Deluxe and the military inspired post-war Willy’s Jeep. Average car prices rose to about $850, and it seemed new models were making debuts each year.

Many consider the 1950s as a benchmark time for automakers as families began buying more vehicles to fit their lifestyle and as status symbols. Cars became increasing stylish with additional options and prices began reaching over $2,000 for well-equipped American made family cars.

Of course, if you have any of these early models, they are very likely to be worth far more than their new car price. Classic and collector car insurance is a specialized product that can be customized for your car and its value. Contact one of our independent insurance agents to discuss your classic car. We can search insurance companies who are knowledgeable in covering such vehicles. Contact us to discuss your vehicle and to get a no obligation quote today.

Six Critical Fluids for Your Car

Increasing the Odds of Getting Your Rent Deposit Back

Automobile Racing in America: A ‘Checkered” Past