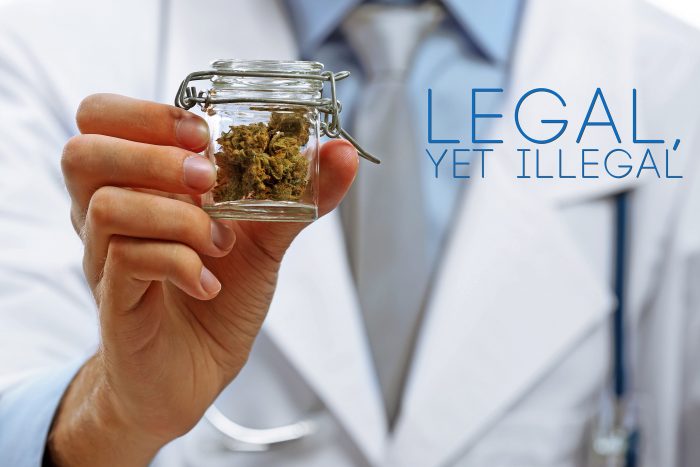 Could you imagine if you went to a doctor and they prescribed you marijuana as a treatment for your condition? Ten years ago, we would have thought that would only be possible when pigs fly. Nowadays, though, there are no pigs flying, yet doctors prescribe marijuana — my, how times have changed.

Thirty-three of the fifty states have legalized marijuana for medicinal purposes. Each state has varying guidelines regarding rules, regulations, and the illnesses that will qualify for a prescription. The law limits the amount of marijuana one can possess at any given time. Also, depending on the state, there are laws against felons receiving a prescription. These laws help to maintain safety and control. However, federal law remains unchanged, classifying marijuana as a Schedule 1 drug. Federal law trumps state law every time, reserving the right of the Feds to seize marijuana from anywhere at any time. However, medical marijuana patients cannot be prosecuted by the Feds if following state laws.

In those thirty-three states, marijuana can legally be prescribed to provide relief from the symptoms of numerous illnesses, including mental illness, and to relieve chronic pain.

In the case that a doctor would need to prescribe a pain-killer, typically, a highly addictive opioid would be prescribed. In a state where medicinal use of marijuana has been legalized, a chronic pain sufferer may instead be prescribed the less addictive, cheaper alternative–cannabis.

Although, on the other side of the fence, one may argue that insurance companies paying out on a federally illegal drug puts that company at too great of a risk. Due to federal law, it is wise for insurance companies to be hesitant to jump on board a business with an unforeseeable future. Some insurance companies have refused to take part in insuring the marijuana business, while others have dived head first into it–recognizing the potential to grow their business by providing insurance where no one else will.

In McNeary v. Freehold Township, the insurer refused pay-out on marijuana treatment as a result of a workers compensation claim, using federal law as its weapon. In court, judge rules in favor of the employee, encouraging using marijuana as treatment as opposed to opioids, according to https://scarincihollenbeck.com/. This is not the first court case to rule in favor of the plaintiff seeking medical marijuana treatment in a workers compensation claim.

In Colorado alone, from 2014 through 2018, the marijuana industry generated $6,039,711,766 in sales, collected from the thousands of dispensaries across the state, all of which need insurance.

More states have legalized medical marijuana than those that have not. The marijuana industry is bringing in billions in revenue for the state. Judges are ruling in favor of the use of marijuana for medicinal purposes. Marijuana treatment is much cheaper than prescription pills, saving insurance companies money on workers compensation claims. Not only that, but cannabis is being recognized as a safer alternative to opioids.

But–none of this matters so long as federal law is in effect.

Will insurance companies start to take risks on the ever growing cannabis industry? Or will insurance companies shut their doors entirely to avoid the liability responsibility of a brand-new business? Will they stop being hesitant to pay out on claims with marijuana treatment, or wait for the federal government to crack down on the (extremely valuable) marijuana industry?

Only time will tell.

A Blog About Blogs: Blogging’s Most Popular Topics

Retail Sales Through the Years

Using Your Smartphone to Enhance Your Life

What You May Not Know About Electric Vehicles

What You Should Know About College Living Spaces

Things You May Not Know About Radio

Want an SUV? Could It Be a Porsche?