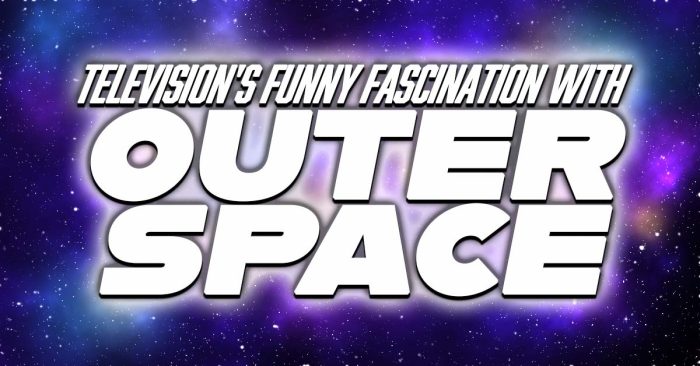 From almost the moment televisions entered our homes, programs began filling screens with programs about outer space, Martian, space travel, rockets and flying saucers. This shouldn’t have been a surprise, as many pre-TV radio programs had a similar focus. While many radio programs were created to be terrifying, many television shows took a different approach. Many used comedy.

Here is a look back at some of television’s memorable outer space themed TV shows that were actually comedies.

Bill Bixby and Ray Walston starred in this comedy that had Walston playing a Martian who moves in with Bixby, posing as his “uncle”. Walston had the unexplained ability to have metal antenna raise from his skull.

Technically, this was not strictly a comedy. Between Dr. Smith, The Robot’s snide remarks, poor acting and equally poor special effects, however, it is hard not to watch this without smiling. It followed the adventures of “The Space Family Robinson” as they jettisoned through space in their own flying saucer. Love this series or not, one has to admit that space rover known as “The Chariot” was pretty cool.

If you’ve never seen an episode of ALF, it stands for Alien Life Form. ALF was an alien who crashed into a suburban garage of the Tanner Family, and because he was a puppet, spent most of the series making wisecracks from behind the family’s couch. The running joke in the series is that ALF wants to eat the family’s cat. Now THAT’S comedy.

An unexpected spinoff of “Happy Days”, this show gave Robin Williams some amazing early exposure as a rainbow-colored, suspender wearing alien who made “Nanoo-nanoo” a catchphrase of the time. Pam Dawber starred as the adorable Mindy.

Third Rock from the Sun

This series ran for 5 years on NBC from 1996 until 2001 and starred John Lithgow and Jane Curtain. It follows the exploits of an alien exploration team playing the part of a family in order to study earth. It features some impressive writing and high-brow comedy. The show couldn’t withstand moving from over a dozen different time slots over its five-year run and was canceled in May 2001.

When one thinks of outer space oriented television, one may think of Star Trek, Space 1999, or even the Twilight Zone series. The subject, however has received its share of comedic treatments through the years, however, although not always successful.